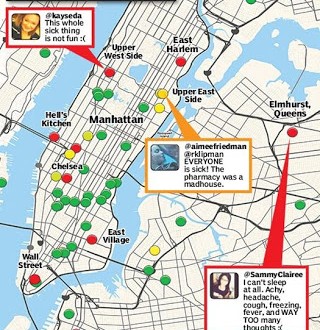 Hell’s Kitchen is burning up — with the flu. The neighborhood is the city’s most infected area — closely followed by the Upper West Side, Carroll Gardens and Elmhurst, Queens, according to a formula created by two upstate professors. The complex, Twitter-based algorithm maps out areas of New York City that are hardest-hit with virus — and then color-codes the outbreaks in green, yellow and red. The Germ Tracker Web app pinpoints key words on the social-networking site — like “headache” and “sick” — to flag high-risk areas in the city. The data are available on smartphones and computers. As of 5 p.m. yesterday, Hell’s Kitchen, the Upper West Side and East Harlem experienced the most “flu-like” symptoms in Manhattan. Other “high-risk” neighborhoods included Elmhurst, Carroll Gardens and the East Village.