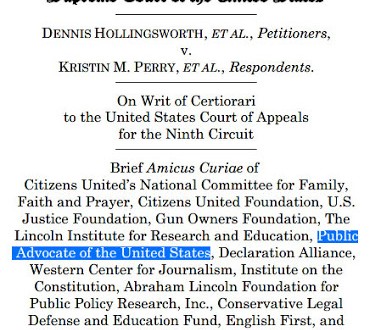 Today Eugene Delgaudio joined a large coalition of anti-gay, Christianist, and gun groups in filing a Supreme Court brief against the overturn of Proposition 8. Sadly, the brief does not open with “It was a dark and stormy night.” It does, however, cite that bit in the Bible that calls for homosexuals to be put to death. And there’s this:

Gay men and lesbian women have not been treated to a history of discrimination based on a “trait.” There is no evidence that such people have been discriminated against on the basis of a characteristic or a propensity. For example, in the enforcement of the criminal law prohibiting sodomy,there must be proof of an actus reus. Likewise, in the enforcement of the law of marriage, a homosexual pair is being denied a marriage license on the ground of sexual behavior, not sexual orientation. In short, Respondents have cited not law prohibiting homosexuality, that is, being sexually attracted to a person of the same sex. Homosexuals are discriminated against not because of who they are, but only for what some may choose to do.

Get it? You’re not discriminated against for being gay, just for living as a gay person. There’s a difference, people! The brief also delves into Loving at some length. Hit the link and give us your thoughts.

UPDATE: Via a commenter, I’m reminded to point out that the above-listed Western Center for Journalism is the parent company of World Net Daily.