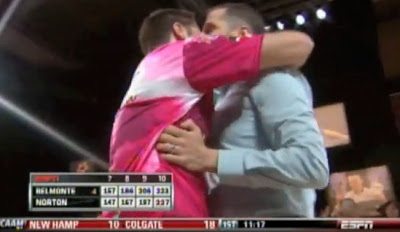 On Sunday ESPN aired the Pro Bowling Association finals in the World Series Of Bowling where the sports network may have made some history. Jim Buzinski writes at OutSports:

In what might be a first, ESPN this weekend showed an openly gay male pro athlete kissing his husband and they did not shy away from describing the relationship. The event was the 2012 PBA Chameleon Championship in Las Vegas, held in November, but shown on TV this Sunday.

Scott Norton won the event over Jason Belmonte and afterward broke down and cried in memory of a friend who had died. He was then shown kissing his husband, Craig Woodward, as they exchanged affectionate words (video below). During the telecast, ESPN’s announcers referred to Woodward as Norton’s husband or spouse.