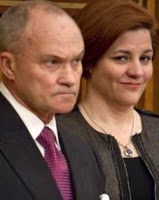 Does Christine Quinn Have Secret Deal To Keep NYPD Chief Ray Kelly Out Of Race?

The police commissioner and council speaker have cut a private deal that will keep him as top cop for a fourth consecutive mayoral term with a Quinn victory in the November race to succeed Mike Bloomberg, sources said. Confidants in both camps confirmed the secret pact — which will bolster Quinn’s anti-crime credentials while allowing Ray Kelly, 71, to keep the powerful post he loves. “Ray is going to stay on if it’s Quinn,” said a source close to Kelly, adding that the commissioner decided months ago that he would agree to keep his job if the next mayor asks him.

Republicans have longed for Kelly to run for mayor as the two other declared GOP candidates (MTA head Joe Lhota and billionaire grocer John Catsimatidis) are considered very long shots against Quinn or any other Democrat. While Quinn’s alleged “secret deal” would take out her best-polling GOP opponent, keeping Ray “Stop-And-Frisk” Kelly in the top cop job will surely sour many prospective Quinn supporters, who could turn to Public Advocate Bill de Blasio, one of stop-and-frisk’s loudest detractors.