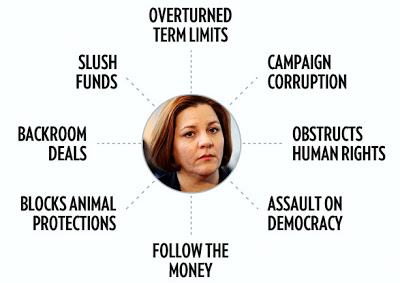 [Donny] Moss, a staunch animal-rights activist, said his beef with Quinn began after the speaker blocked a bill that would have outlawed horse-drawn carriage rides in the city. “I thought, this is so undemocratic,” recalled Moss, whose frustration grew as he watched Quinn help overturn term limits to pave the way for Bloomberg’s third term — a move critics say was done in return for the mayor’s support for her 2013 run.

His scorn grew to encompass her tenure during the so-called “slush fund scandal,” where it was revealed that Council members were handing out discretionary money to fake organizations and political cronies with little oversight. Quinn said she immediately reported the activity to authorities and passed reforms to stop it. Moss’s ire also includes Quinn’s recent blockage of a mandatory paid sick-leave bill. “As I started to pay more attention to the social justice issues, the human rights issues, the good government issues, I thought something needs to be done here,” Moss said.

Yesterday the New York Times reported that Mayor Bloomberg appears to be actively recruiting alternatives to Quinn, who continues to show commanding poll numbers against all prospective candidates.

The conversations have occurred over dinners and by telephone, in tones both serious and playful. The prospects span the world of government and business, a group whose members dwell within the five boroughs and beyond the city’s borders. Mr. Bloomberg has mused about a Mayor Charles E. Schumer with the Democratic senator from New York, and teased Mortimer B. Zuckerman, a fellow billionaire media mogul, about a possible bid. The mayor’s advisers raised the idea of a run with Edward G. Rendell, the former Democratic governor of Pennsylvania and mayor of Philadelphia, and with Edward Skyler, Mr. Bloomberg’s former top deputy in City Hall, according to several people. The mayor’s most formal overture was delivered to Secretary of State Hillary Rodham Clinton, perhaps Mr. Bloomberg’s most quixotic choice for the job. The mayor personally encouraged her to enter the race about a year ago, three people who were told about the discussions have told The New York Times. The conversations suggest that Mr. Bloomberg and his aides long for somebody who can match his own blend of celebrity, success and self-assurance.