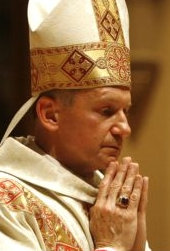 Illinois Bishop On His Handcuffed & Gagged Priest: It Was Non-Sexual Self-Bondage Because He Was Alone

Remember the priest who called 911 for help getting out of his handcuffs and mouth gag?  Today that priest’s boss, Diocese of Springfield Bishop Thomas Paprocki (left), is telling the press that that there was “no sexual component” to the incident because the priest had been alone at the time. Uh-huh. According to Paprocki, “self-bondage” was merely the priest’s way of alleviating the stress of his job.

Here’s an excerpt of Paprocki’s statement:

The unfortunate result of such patterns of life—in no way limited to the experience of Catholic priests—is that persons often find themselves seeking patterns of ‘self-medication’ to soothe emotional turmoil. Alcoholism, the use of illicit drugs, compulsive gambling, sexual acting out and the use of pornography are some of the more common manifestations, none of which were present in this situation. Instead, according to the clinical therapist, Father Donovan is suffering from a psychological condition that manifests itself in self-bondage as a response to stress.* The clinical therapist also confirms that the strict absence of illicit sexual behaviors, relationships, and patterns reveal that this self-bondage is to be understood as non-sexual in nature.

Father Donovan appears to have been completely forthright with me in his account of this event, which is consistent with the public record. In the face of the embarrassment of these revelations, the subsequent attention of the press, and the widespread distribution of misinformation found on the Internet and elsewhere, he asks for the basic respect of accurate reporting of the event, the correction of untrue defamatory information arising from unsubstantiated rumors and claims, and the privacy now to heal from the trauma of this event and the original stress that precipitated it.

Paprocki goes on to post a definition of “non-sexual self-bondage.” (Tipped by JMG reader Andrew)

RELATED: Earlier this month Paprocki appeared at the Illinois state house to testify against that state’s proposed same-sex marriage bill.  The following Sunday he ordered all the parishes in his diocese to read an anti-gay letter during mass.  In September, Paprocki posted a YouTube video in which he warned that Satan “will take the souls” of any Catholic who votes for a Democrat.

CORRECTION: An earlier draft of this post misidentified Paprocki as being from Connecticut, home of last week’s “cross-dressing meth priest” story. I’m getting all these kinky priest stories mixed up!

Previous Is Uncle Poodle Lying About Sending His HIV+ Former Boyfriend To Prison?
Next Quote Of The Day – Michael Brown