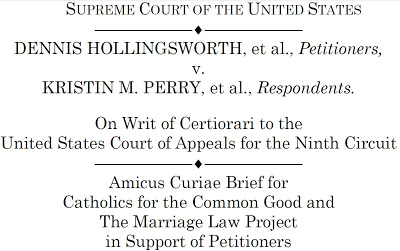 Catholics for the Common Good has filed a Supreme Court brief against the overturn of Proposition 8, claiming that doing so constitutes “an attack on religion.” Here’s an excerpt from their summation:

When the courts below held the People of California violated the Constitution when they voted to reaffirm the unique biological and cultural status of the only civil institution that unites male-female couples with each other and any children that might be born from their union, they rejected the central premise of this Court’s jurisprudence of the Equal Protection Clause. Unlike the “socially-constructed” classifications that the Court now rightly views with suspicion, such as race, illegitimacy and alienage, “physical differences between men and women . . . are enduring” and a “cause for celebration”.

Not in the Ninth Circuit. A majority of that court has held that the views of voters who relied on this view of human sexuality are “so far removed” from reality that the court found “it impossible to credit them.” The trial featured a sustained attack on “religion [as] the chief obstacle for gay and lesbian political progress” that also raises a profound First Amendment question: Does the Equal Protection Clause authorize federal courts to order the People themselves – and, by implication, individuals and associations – to provide homosexual persons with precisely the same “official recognition and societal approval of their committed relationships that the State makes available to opposite-sex couples”?

Previous Linda Harvey Has The Boy Scouts Sadz
Next New Theme: We’ll Be The Republican Party That People Want To Join