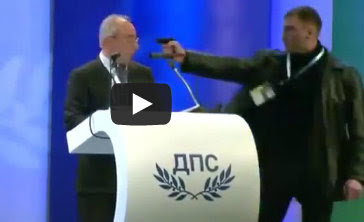 A man jumped on stage and pointed a gun at the leader of Bulgaria’s ethnic Turkish party before security guards wrestled him to the ground during a televised conference on Saturday. Ahmed Dogan, the long-time leader of the Movement for Rights and Freedoms (MRF) escaped unscathed, and it was not immediately clear why the attacker had targeted him at the party congress in downtown Sofia. Television footage showed the man jumping out of the audience and interrupting a speech by 58-year-old Dogan, who has led the party for almost a quarter of a century. Security guards were seen beating and kicking the attacker. “Ahmed Dogan is in good health. Everything is under control,” MRF official Ceyhan Ibryamov told journalists.

Some reports say the gun was a “gas pistol” which is not considered lethal is most situations. But it probably could be at point-blank range.