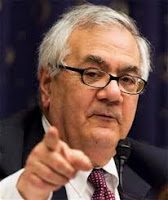 “There was one thing that sort of troubled me in the discussion about it — nobody was particularly quoted; they attributed something to governor’s office and others — was that the governor would want to appoint someone who’s either a minority or a woman. And what troubled me is the question of LGBT people was just kind of swept out. I’ve never asked for any appointment based on me being gay, but when they begin talk about the importance of diversity and leave us out, that troubles me. It’s almost as if some people didn’t listen to the president when he said, ‘Seneca, Stonewall and Selma,’ and didn’t hear the Stonewall part. Just as it was in the House, I think being a same-sex married couple in the Senate could have took an important lesson home to some of them.” – Former Rep. Barney Frank, speaking to the Washington Blade about being passed over for the interim Senate post.