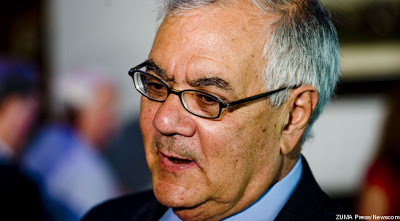 Barney Frank: I Want To Be Senator

This morning former Rep. Barney Frank told MSNBC that he has asked Massachusetts Gov. Deval Patrick to appoint him interim Senator to replace John Kerry. Two weeks ago Frank said he “wouldn’t say no” if Patrick appointed him.  Via Politico:

“A month ago, or a few weeks ago, I said I wasn’t interested,” Frank said on MSNBC’s “Morning Joe.” “It was kind of like you’re about to graduate, and they said: ‘You gotta go to summer school.’ But [the fiscal cliff deal] now means that February, March and April are going to be among the most important months in American financial history.” He added, “I’ve told the governor I would now like, frankly, to do that [serve as interim senator].” Frank said he wouldn’t run for Kerry’s seat in a special election, which would likely take place this summer.

Frank spent 32 years as a member of the House.