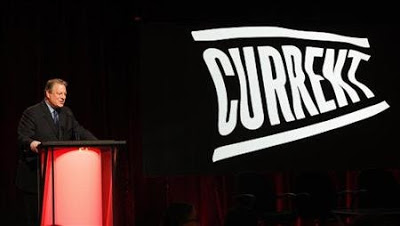 In a move that has wingnuts screaming, Al Jazeera has acquired Al Gore’s CurrentTV.

Al Jazeera on Wednesday announced a deal to take over Current TV, the low-rated cable channel that was founded by Al Gore, a former vice president, and his business partners seven years ago. Al Jazeera plans to shut Current and start an English-language channel, which will be available in more than 40 million homes, with newscasts emanating from both New York and Doha, Qatar.

For Al Jazeera, which is financed by the government of Qatar, the acquisition is a coming of age moment. A decade ago, Al Jazeera’s flagship Arabic-language channel was reviled by American politicians for showing videotapes from Al Qaeda members and sympathizers. Now the news operation is buying an American channel, having convinced Mr. Gore and the other owners of Current that it has the journalistic muscle and the money to compete head-to-head with CNN and other news channels in the United States.

The deal is valued at $500M with about $100M going to Gore.  The new channel will be called Al Jazeera America with about 40% of its programming coming from the respected (by some) Al Jazeera English.

Quite predictably, Pam Geller is furious.

Full circle and out of the proverbial closet. The left goes full-on jihad. Al Jazeera has acquired Current TV. More jihadist propaganda on your cable dial. Lord knows that there is a plethora of Muslim Brotherhood mouthpieces on broadband, but a dearth of pro-freedom voices (i.e. SUN TV). Al Jazeera is the leading terrorist propaganda organization in the world.

RELATED: Last last night Time Warner Cable announced that they will not carry the new channel.

UPDATE: Below is the image appearing this morning on Current’s channel for Time Warner NYC.   I’ll miss watching the Stephanie Miller Show.