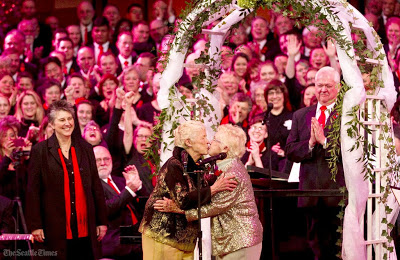 Via email from Sean Chapin:

This picture is of the Seattle Mens’ and Women’s Chorus (they’re gay-identifying choruses). During their weekend concert, one gay and one lesbian couple both with the longest relationships got married onstage, coinciding with the day when marriages became legal in Washington. From what I heard, the lesbian couple pictured here have been together for over 30 years. Their wedding ceremony ended the first half of the concert, and a local cake company had donated “wedding” cupcakes for the entire audience in the lobby during intermission.