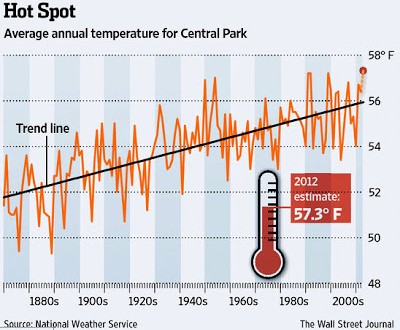 New York City is poised to finish its warmest year since modern record-keeping began, with an average temperature projected to top 57.2 degrees. A Wall Street Journal analysis of federal temperature data from an observation station at Central Park puts 2012 on course to surpass the three-way tie for the city’s warmest year, which is currently shared by 1990, 1991 and 1998. Temperature records at Central Park date back to 1869, the longest-running set of government weather data in the five boroughs. Eight of the 10 warmest years in that span have occurred since 1990. Tree-ring analysis and other proxy data compiled by climate scientists suggest 2012 might be the warmest since the Dutch opened the trading post of New Amsterdam in 1624, said William Solecki, director of the CUNY Institute for Sustainable Cities at Hunter College. “I think it is entirely possible that 2012 might be the warmest year for the city since its founding,” he said.

“It snowed a few times in 2012, therefore climate change is a communist conspiracy concocted by leftists to destroy American capitalism,” said every wingnut in Teabagistan.