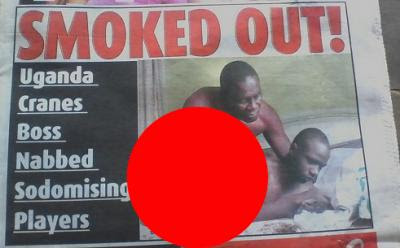 The Ugandan daily tabloid Red Pepper today published photos allegedly depicting a local soccer star having sex with a young man they characterize as a “boy.” Gay Star News has the story:

A photo depicting Chris Mubiru having anal sex with a young man covered the entire front page of the paper entitled: “SMOKED OUT! Uganda Cranes boss nabbed sodomising players – Shocking pictures inside.” The paper printed five striking photos of the head of Cranes football team allegedly in the process of “sodomising“ a young team player. The photos detailed the alleged sexual acts with captions designed to outrage the country’s conservative population: “MASTER AT WORK: Mubiru nails the boys butt,”  “shafting” and “hurting the boy,” to finally “END GAME: The boy struggles to stand up after the bum shattering session.” The alleged “young player” was not identified nor could the validity of the pictures be ascertained. No statement has been issued by the Crane’s football team at the time of publishing this story. Speaking with Gay Star News, Denis Nizoka, editor of Identity Kenya said: “This was clearly designed to provoke a moral outrage about what is seen as a bastion of male sportsmanship – the country’s top football team.”

The timing of today’s Red Pepper story is doubtlessly meant to generate increased support for the still-pending Anti-Homosexuality Act.

RELATED: In 2010 a different Uganda tabloid published the names and photos of “100 Top Homos” under the headline “HANG THEM.”

Previous Jesus Is In The Closet
Next Alec Baldwin Slams NYC Speaker Christine Quinn: She Has Blood On Her Hands