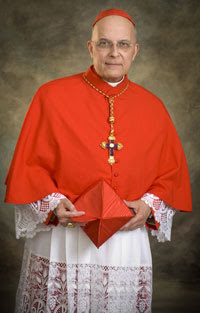 “Marriage comes to us from nature. That’s based on the complementarity of the two sexes in such a way that the love of a man and a woman joined in a marital union is open to life, and that’s how families are created and society goes along. It’s not in our doctrine. It’s not a matter of faith. It’s a matter of reason and understanding the way nature operates. You want to be sure that everybody has a chance at happiness. That’s a very persuasive argument. But we all want that, and nobody should be disdained or persecuted because of their sexual orientation. But when we get behind the church and behind the state, you’ve got a natural reality that two men or two women cannot consummate a marriage. It’s a physical impossibility.” – Cardinal Francis George, speaking to the Chicago Tribune.

RELATED: One year ago George compared Chicago’s gay pride organization to the KKK after the group announced a new parade route that would pass a local Catholic church.  George later apologized.