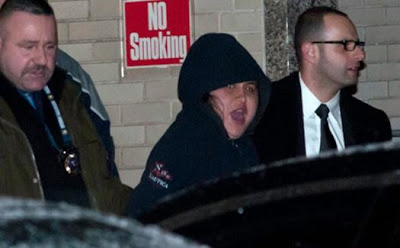 New York City police today apprehended the woman who pushed an Indian immigrant to his death under the 7 train in Queens on Thursday. Reportedly, the victim was chosen because his killer believed him to be Muslim.

In a statement released by the district attorney’s office, Mr. Brown quoted Ms. Menendez, “in sum and substance,” as having told the police: “I pushed a Muslim off the train tracks because I hate Hindus and Muslims ever since 2001 when they put down the twin towers I’ve been beating them up.” Ms. Menendez conflated the Muslim and Hindu faiths in her comments to the police and in her target for attack, officials said. The victim, Sunando Sen, was born in India and, according to a roommate, was raised Hindu.  Mr. Sen “was allegedly shoved from behind and had no chance to defend himself,” Mr. Brown said. “Beyond that, the hateful remarks allegedly made by the defendant and which precipitated the defendant’s actions should never be tolerated by a civilized society.” Mr. Brown said he had no information on the defendant’s criminal or mental history. “It will be up to the court to determine if she is fit to stand trial,” he said.

Menendez will likely be charged with murder as a hate crime.

RELATED: After two such pushing deaths in the space of several weeks, the MTA says they are reconsidering a plan to install sliding barricades on some subway platforms.  Such barriers are in place on major subway systems around the world.  The MTA had previously estimated that it would cost at least a billion dollars to retrofit most of its 468 stations. About one person per week has died on the subway tracks this year due to suicide, falls, and more recently, murder.

UPDATE: The New York Post reports that a relative claims that the killer has a history of mental problems.

Menendez could have a criminal background — and possibly a history of mental health issues, the sources said. She has recently been living in homeless shelters. The suspect was taken to the 112th Precinct in Forest Hills. “All I know is that she’s bipolar and as far as seeing the footage, I’m pretty sure it was her,” said a cousin of the suspect who declined to give his name. “I don’t know much about her whereabouts or what she’s been up to these past few months.”

UPDATE II: Pam Geller says she has no responsibility in the murder because her latest round of anti-Islam subway ads have not yet been posted.

First off, my ads are not up yet in the subways. They are not scheduled to go up until January 7, 2013. And even if they were, how does that make me responsible? This murderess states most emphatically what her motive was: September 11. Why aren’t the Islamic supremacists blaming jihad? Al Qaeda? Because they share AQ’s ideology and goals and they are going to try to use this senseless murder to silence critics of genocide, ethnic cleansing and anti-humanism. Jihadists can kill thousands in the cause of Islam and the media, the left and political elites are OK with that, but some nut does something nuts and I am responsible? That’s the war that we are in.

Below is Geller’s subway ad which ran earlier this year.