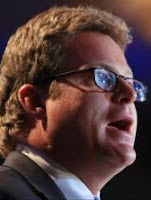 The Boston Herald reports that top Massachusetts Democrats are urging Edward Kennedy Jr. to submit himself to replace Sen. John Kerry, who will likely succeed Hillary Clinton as Secretary of State.

“Several people have approached (Kennedy) about running,” said the source. “They are all mindful that his name is Edward M. Kennedy.” If Teddy Jr. runs, it will be the first time the Edward M. Kennedy name has been on the ballot since the liberal lion last ran in 2006. He died in 2009. The Kennedy name still carries tremendous political clout in Massachusetts and if Teddy Kennedy Jr. jumped in, he likely would clear the Democratic field. U.S. Representatives Edward Markey, Michael Capuano and Steven Lynch all are considering a run for the Senate seat. U.S. Attorney Carmen Ortiz and Attorney General Martha Coakley also are potential Democratic candidates.

Soon-to-be former Sen. Scott Brown is expected to enter the special election. According to the above-linked article, insiders believe that only someone with the famed Kennedy name could beat Brown.