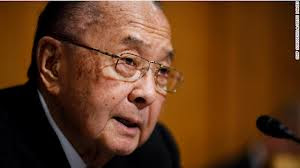 Nine-term Democratic Sen. Daniel Inouye has died at the age of 88.

“His last words were, ‘Aloha,'” his office said. Inouye died at Walter Reed National Military Medical Center, with his wife, Irene, and his son, Ken, at his side. Last rites were performed by Senate Chaplain Dr. Barry Black, his office said. A senator since 1963, Inouye in 2009 became chairman of the Senate Appropriations Committee, where he continued a long record of helping fund projects in his home state. From 1998 to 2003, he steered $1.4 billion to military projects in Hawaii, according to The Almanac of American Politics. The son of Japanese immigrants, Inouye grew up in Honolulu, where he was teaching a first aid course at age 17 when Pearl Harbor was attacked. He enlisted in the Army in 1943, when it dropped its ban on Japanese Americans.

Inouye was the second-longest serving Senator and the highest-ranking Asian American in history. Next month would have marked his 50th year in the chamber.

UPDATE: The Human Rights Campaign has issued a statement.

LGBT Americans across this country especially honor his unequivocal support for full LGBT equality—most notably, his 1996 vote against the discriminatory Defense of Marriage Act, his support for marriage equality and his co-sponsorship of the Employment Non-Discrimination Act and other pro-equality legislation. Senator Inouye was a trailblazing leader and he will remain in our memories for standing with his LGBT sisters and brothers from day one. We will miss him, and every American should be grateful to have been touched by the life of this remarkable man.