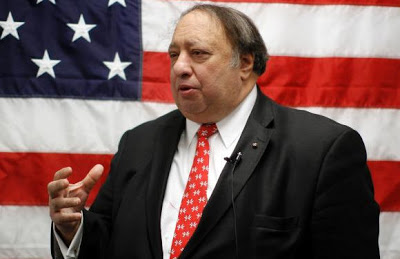 NEW YORK CITY: Billionaire Grocer To Run For Mayor As A Republican

Billionaire John Catsimatidis, the owner of the Gristedes supermarket chain, will file his intent to run for New York City mayor tomorrow.

Like Mayor Bloomberg, Catsimatidis is a former Democrat seeking a second act after a fabulously successful business career. But this isn’t quite Bloomberg II. While Catsimatidis says he’s prepared to spend as much as $20 million of his fortune to run, he also will be open to taking contributions. Bloomberg only used his own money. And if Catsimatidis wins, he won’t take the symbolic, dollar-a-year salary that Bloomberg draws. “I’m a grocer. 99 cents,” he said. Catsimatidis already has strong backing from one county GOP chairman, Manhattan boss Daniel Isaacs. “If John Catsimatidis is running, he has my unqualified support,” Isaacs said. “He is an accomplished businessman who has a tremendous story to tell.”

Catsimatidis says he’ll step aside if NYPD Chief Ray Kelly enters the race. Kelly, thus far, has denied any intention to run. The only other prominent Republican known to be considering a run is MTA head Joe Lhota.  There are 30 Gristedes locations in NYC and Westchester County.