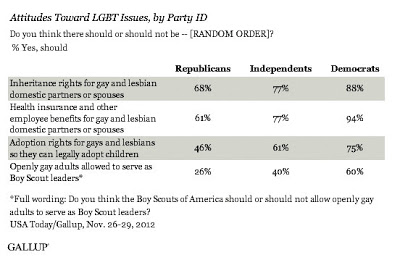 While 53% of Americans support legalizing same-sex marriage, significantly higher percentages support the idea of equal rights for partners or spouses of gays or lesbians when it comes to inheritance rights and employee benefits, and making it legal for gays and lesbians to adopt children. Support for all three issues is up at least slightly from three years ago.

Less than half of Americans, however, support the idea of openly gay adults serving as Boy Scout leaders. Given the lack of a trend on this question, it is not clear whether support is higher than in the past, or the degree to which the lack of support may reflect respondents’ reluctance to say how a private organization should decide who holds its positions of leadership.