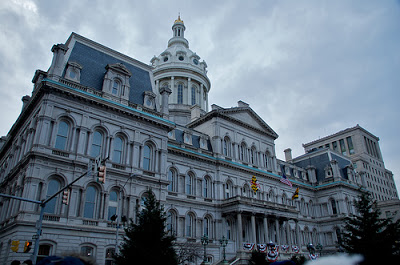 Maryland’s first same-sex marriages will take place tonight shortly after the first stroke of the new year. The mayor of Baltimore has ordered the opening of City Hall for the ceremonies.

“New Years Day will have a new meaning for the hundreds – if not thousands – of couples who will finally have the right to marry the person they love,” said Mayor Stephanie Rawlings-Blake. “It is a remarkable achievement for Maryland, and we are excited to open City Hall to host some of the first wedding ceremonies in our great state. Newly married couples will stand before their friends and family to profess their love and commitment to each other. This is what we worked for, and I am looking forward to take part in this historic and jubilant day.” Brennan says Rawlings-Blake will act as an official witness, but will not preside over any ceremonies.

The first couple to marry will be the mayor’s aide and his partner of 35 years.