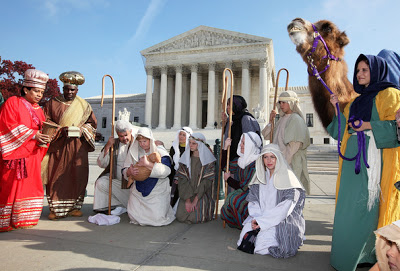 Charisma News has the story:

The Nativity Scene, sponsored by Faith and Action and The Christian Defense Coalition, was held Wednesday at 10:30 a.m. in Washington, D.C. in response to other courts banning nativity scenes in some parts of the country.  “Sadly, we are seeing an erosion and hostility toward public expressions of faith in the public square. This is especially true during the Christmas season., the Rev. Patrick Mahoney, director of the Christian Defense Coalition, said.

“’The Nativity Project’ is a reminder that our Constitution provides freedom of religion not freedom from religion. By encouraging people of good will to publicly display nativity scenes all across America, we are not only supporting religious liberty and First Amendment freedoms but we are loudly proclaiming the powerful message of Christmas. That timeless message needs to be heard now more than ever: ‘Peace on earth and goodwill toward man.’