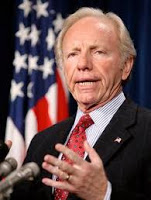 Now that he’s in the final days of his 24-year run, Sen. Joe Lieberman says it’s time to considering term limits for his soon-to-be old job.

“My position on this has changed,” Lieberman said of term limits in an interview with a local television station that aired Sunday. “I’ve always felt that there are term limits for senators — it’s six years and it’s up to voters to decide whether they want somebody to go on, and you need some people around here with some experience.” But now, he said, “I’m beginning to feel now that the place needs to change more often.” It’s actually the House of Representatives, “where people really tend to serve longer,” where Lieberman argued that a change could do the most good. “I think the place might be healthier and less partisan and more rigid if it turned over more often,” he said.