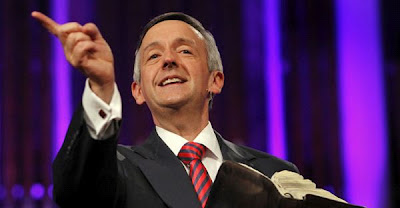 How To Prevent Armageddon

“I think we ought to have a strong military, but there is absolutely no amount of armaments we could require to protect ourselves against the judgment of almighty God. The best defense policy we could have as a nation, instead of just the acquisition of an endless number of armaments, the best defense policy we could have to protect our nation would be to turn away from ignoring God’s almighty law; to turn away and say no to these things that God has said no to; to turn around and repent from the murder of millions of children in the womb through abortion; to turn away and say no to what God has called an abomination, homosexual marriage; to say no to the continued allowance of God’s named to be blasphemed or be banned from the public square.” – Pastor Robert Jeffress, on how to prevent Armageddon. Don’t the Jeebus people want Armageddon to happen? (Via Right Wing Watch)

RELATED: We last heard from Jeffress when he announced that gay people want to legalize pedophilia.  And early in the presidential campaign, he revealed that Mormons and Jews will all end up sucking Satan’s cock in hell. Or something.