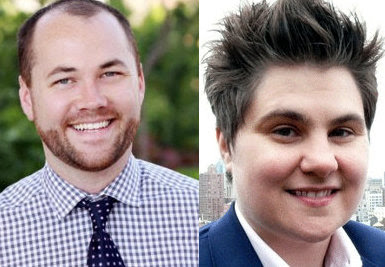 Gay Vs Gay For NYC Council

When I ran into attorney and activist Yetta Kurland at the Stonewall Inn two weeks ago, she told me she hadn’t yet decided on whether to challenge Community Board 4 chairman Corey Johnson in the race to succeed Christine Quinn as Chelsea’s representative on the New York City Council. Today we learn Kurland is in. Via Gay City News:

In 2009, Kurland took on Quinn, who had then been speaker for four years, and earned a third of the vote in a three-woman race, holding the incumbent to just over 50 percent. Since then, Kurland’s visibility has remained undiminished –– tackling issues like the closure of St. Vincent’s Hospital and the rights of Occupy Wall Street participants to hold their ground in Zuccotti Park, and also hosting a weekly radio show on WWRL AM 1600. In announcing her candidacy, Kurland evoked her now familiar combatively progressive tone. Saying New York, her home for the past two decades, is “the greatest city in the world,” she warned, “We’re heading toward becoming a place where only the richest can afford to live and where our public resources are being converted into private profit.”

Kurland has released a list of 65 prominent local activists who support her campaign. Johnson issued his own lengthy list of backers in August.

DISCLOSURE: Johnson is a personal friend and my name appears on his list. However I also quite like Yetta Kurland.  I don’t live in their district and therefore cannot vote for either.

Previous NARTH: We Will Continue Gay Cure Work Even If Epigenetics Theory Is Proven
Next ILLINOIS: Lame-Duck Session May See Marriage Vote Next Month