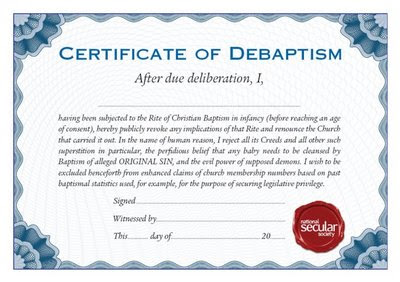 Years ago I posted about the “debaptism” movement in which Catholics request that their names formally be stricken from the memberships rolls of their local diocese. This month that (mostly) symbolic move has gained steam in the Netherlands due to Pope Ratzinger’s incessant attacks on same-sex marriage.

Tom Roes, whose website allows people to download the documents needed to leave the church, said traffic on ontdopen.nl – “de-baptise.nl” – had soared from about 10 visits a day to more than 10,000 after Pope Benedict’s latest denunciation of gay marriage this month. “Of course it’s not possible to be ‘de-baptized’ because a baptism is an event, but this way people can unsubscribe or de-register themselves as Catholics,” Roes told Reuters. He said he did not know how many visitors to the site actually go ahead and leave the church. About 28 percent of the population in the Netherlands is Catholic and 18 percent is Protestant, while a much larger proportion – roughly 44 percent – is not religious, according to official statistics. The country is famous for its liberal attitudes, for example to drugs and prostitution, and in April 2001 it was the first nation in the world to legalize same-sex marriages.

RELATED: Early this year a French man successfully sued to have his name removed from the baptismal records of his diocese. He was the first in his nation to be officially debaptized.  In Germany, about 200,000 Catholics have filed the paperwork declaring that they will no longer pay the religion tax which is allocated to the Catholic Church.

NOTE: The above certificate is from Britain’s Secular Society.