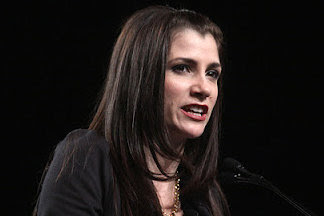 Screeching, repulsive, anti-gay Dana Loesch, the darling of GOProud, is suing her employers at Breitbart.com.

Conservative talk radio host and commentator Dana Loesch sued the owner of the conservative website Breitbart.com Friday, claiming that although her relationship with the news and opinion aggregating website had gone “tragically awry,” Breibart.cοm LLC refused to let her work for the company or anyone else, forcing her into “indentured servitude in limbo.”  The suit says that difficulties managing the Breitbart “media ’empire’” or ideological conflicts or both had spiked the working relationship, creating a “increasingly hostile” work environment. When Loesch tried to terminate her work agreement in September, Breitbart refused and extended the agreement by a year, the suit says. Breitbart.cοm LLC refuses to allow her work to be published and “sabotages” her attempts to find work elsewhere, the suit says.

In a month filled with delicious wingnut infighting, this one might be the best.


PREVIOUSLY ON JMG:  Dana Loesch says gay activists are at war with Christians.  Dana Loesch denies that the Family Research Council lobbied in support of Uganda’s “kill the gays” bill.  Dana Loesch is invited to GOProud’s Homocon 2012 event, shortly after screaming during her radio show that supporters of marriage equality “hate Christ.”  Dana Loesch says the Chick-Fil-A boycott is stupid because we use gasoline in our cars. (SRSLY).