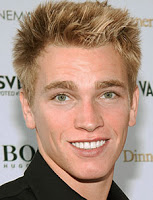 Calvin Klein’s Ex: He Hooked Me Up To A Lie Detector To Prove I Wasn’t Cheating

Today Page Six Magazine published a lengthy interview with Calvin Klein’s former boytoy, Nick Gruber, who is about to publish a tell-all account of their relationship.  An excerpt:

Gruber claims, Klein’s jealousy started to sour the affair. That spring, the designer left town, and Gruber invited a male friend to sleep over at Klein’s Perry Street residence for, he says, entirely innocent reasons. When Klein returned, the housekeeper tattled about his lover’s overnight guest. Despite Gruber’s denials, the designer assumed the worst-and that’s when things got ugly, he says. “[Calvin] picked me up in his car, drove me down to the Holiday Inn in Chelsea, and we went downstairs in the basement of the hotel,” he says, furrowing his brow. According to Gruber, another man was waiting there with a lie detector. He said he was an ex-detective, and presented a business card bearing the name “Dr. Love.” Gruber, indignant that Klein was accusing him of cheating, says he agreed to be hooked up to the machine and interrogated for about two hours. “He made me take a lie-detector test,” Gruber says in disbelief. “I passed it. And then, you know, things were much better. But I mean, what kind of partner would make you take a lie detector test? I was like, ‘Did you ever cheat on me, Calvin?’ I never cheated on him.”

Gruber also complains that Klein took back his $250,000 Bentley after they broke up. His book is due early next year.

Previous 60 Reasons To Be Proud In 2012
Next NEVADA: Anti-Gay Group Bypasses Appeals Court And Asks SCOTUS To Rule On Same-Sex Marriage Ban