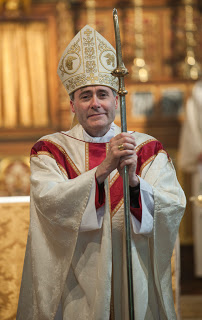 “Past generations have gathered in this cathedral on Christmas night amid many shadows which seemed to obscure the future for them. We think of the ideologies of the past century, Communism and Nazism, which in living memory threatened to shape and distort the whole future of humanity. These inhuman ideologies would each challenge in the name of progress the received Christian understanding of the sanctity of human life and the family. Winston Churchill, Britain’s wartime Prime Minister, a man without clear, religious belief, saw in this deadly struggle nothing less than the defence of Christian civilisation.

“Few of our political leaders today appear to glimpse the deeper issues when the sanctity of human life and the very identity of marriage, the foundation of the family, are threatened. his Christmas we are also conscious of new shadows cast by a Government that was pledged at its election to support the institution of marriage. The Prime Minister has decided without mandate, without any serious consideration, to redefine the identity of marriage itself, the foundation of the family for all generations to come. This is again done in the name of progress. The British people have reason to ask on this night where is such progress leading?” – Bishop of Shrewsbury Mark Davies, from remarks released in advance of tonight’s midnight mass in Britain.