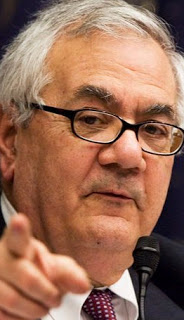 “I was glad that he made clear what’s been obvious, that he’s just a flat out bigot. I’d previously said he was a homophobe. And Fox and the rightwing said, ‘Oh just because he’s not for same-sex marriage? And I said, ‘No, let me be very clear. That’s not it. This is a man who has said you should go to prison for having sex.’ It was an extraordinarily abusive sentiment and it was dead wrong. And, by the way, for a guy who is supposed to be so smart — quite stupid.This young man said to him, ‘Why do you compare sodomy to murder?’ And he said, ‘Well because I have a right to say if I think something is immoral.’ Well the question wasn’t about his right. The question was, By what morality is expressing your love for someone in a physical way equivalent to killing that person? It makes it clear that the man is an unreconstructed bigot, and given that you have a bigot on the Supreme Court like that, it is useful to know.” – Rep. Barney Frank, speaking to Michelangelo Signorile.