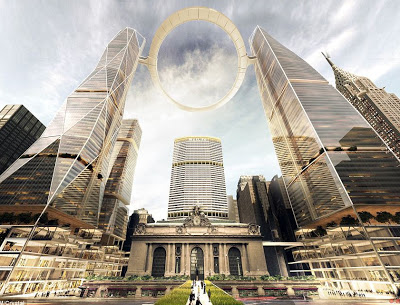 Something Cool That Will Never Happen

A giant donut walkway could soon hover above New York’s Grand Central Station in plans to restore the transport hub to its former glory as the glittering gateway into America’s commercial heartland. The circular gallery would be suspended hundreds of feet in the air between two skyscrapers and will move up and down to give visitors views across the city from different heights, similar to the London Eye. The ambitious design is one of three proposals submitted to the Municipal Art Society of New York who will chose the winner after a lengthy public consultation.

More artist renderings at the link.