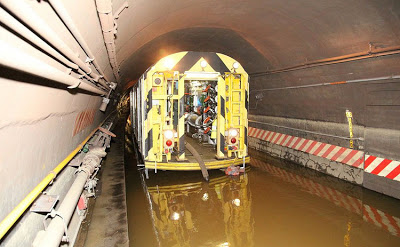 This Is How The Subway Gets Pumped Out

From a photo montage posted to Flickr we learn that the MTA pumps out the flooding subway tunnels using special six-car trains containing massive hydraulics.  According to today’s MTA service advisory we learn that about 80% of 468 stations are back in service or will be some time today.  Gothamist has a short recap:

You can go here to see a PDF of the latest MTA subway map, which among other things, shows cross-river service has been restored on the F, D, 2 & 3 lines. The M line has now also been restored full length through Manhattan to Brooklyn. The MTA are hard at work now to restore the Q, M and A to Brooklyn: M service now runs through Manhattan from Queens through Brooklyn and back to Queens (Parsons to Metropolitan), and Q service is now running in Brooklyn (Kings Highway to Atlantic Ave-Barclays Center). But they caution that the two lines that will take longest are the L and G; they might not be ready till later this week, at best.

Mayor Bloomberg recommends commuting as early as possible this week as many subway and bus lines will be straining under all the traffic normally seen on the still suspended lines.

Previous Gay And Voting For Romney
Next Invisible Parents