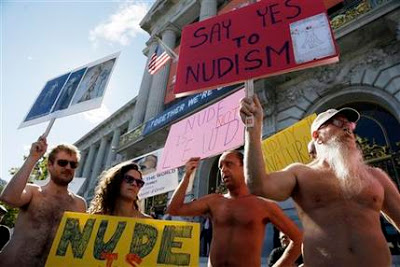 Tomorrow San Francisco’s Board of Supervisors will rule on a proposed ban on public nudity, which has long been legal on city streets provided that a person isn’t in a state of “obvious arousal.”

Supervisor Scott Wiener’s proposal would make it illegal for a person over the age of 5 to “expose his or her genitals, perineum or anal region on any public street, sidewalk, street median, parklet or plaza” or while using public transit. A first offense would carry a maximum penalty of a $100 fine, but prosecutors would have authority to charge a third violation as a misdemeanor punishable by up to a $500 fine and a year in jail. Exemptions would be made for participants at permitted street fairs and parades, such as the city’s annual gay pride event and the Folsom Street Fair, which celebrates sadomasochism and other sexual subcultures.

Wiener says that he is reluctantly backing the change due to the high volume of complaints about the men who regularly gather in a public plaza in the Castro. Residents and merchants point out that the Castro nudists come from outside the neighborhood because they believe they will face fewer objections there. Some claim that few of the nudists are gay themselves.