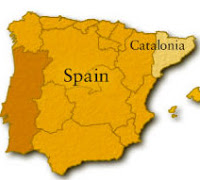 Flying pro-independence flags – a lone star against yellow and red stripes – Catalan voters on Sunday handed 87 seats, almost two-thirds of the local parliament, to four different parties that want a referendum on secession. But voters also punished the movement’s figurehead, Catalan President Artur Mas. His Convergence and Union alliance, or CiU, remains the biggest party in the local parliament, but it lost 12 seats and Mas will have to form an alliance with another party to govern. Mas had tried to ride the separatist wave after hundreds of thousands of people demonstrated in the streets in September, demanding independence for Catalonia, which has its own language and sees itself as distinct from the rest of Spain. But Mas only recently backed Catalan independence, and while he stirred up enthusiasm for the idea, in the end he drove voters into the arms of parties seen as more genuinely representative of the separatist cause.

The Guardian weighs in on the vote:

Unlike the Scottish referendum set for 2014 in agreement with London, the central government in Spain has pledged to block an independence vote for Catalonia by appealing to the constitutional court, which stopped the Basque country from holding a similar plebiscite in 2008. Apart from opposition in Madrid, one of Mas’s biggest difficulties is uncertainty over whether a newly independent Catalonia could remain within the European Union and the euro. The European commission president, José Manuel Barroso, said in Spain last weekend that EU treaties required breakaway states to join the queue for membership.