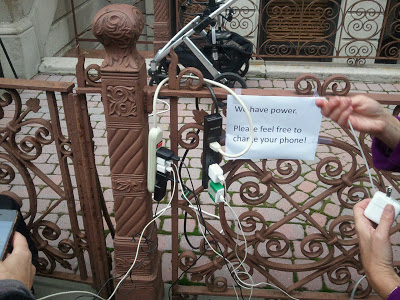 Hoboken, New Jersey, which is just across the Hudson River from the West Village, remains heavily flooded and 90% of its residents may not see power restored for another week. Last night the National Guard began distributing food and water.

Tempers flared Wednesday at a staging area outside City Hall, where a man screamed at emergency officials about why food and water had not been delivered to residents just a few blocks away. The man, who would not give his name, said he blew up an air mattress to float over to the staging area. City officials defended their response. “The dimension and scope of this situation is enormous,” Public Safety Director Jon Tooke said. “You have emergency operations at all levels — from local to federal — spread too thin across the city and the state, but we’re working on it.” Tooke said the estimated 20,000 people still stranded in their homes were being encouraged to shelter in place, and that high-water vehicles would get supplies to them. He said people with medical and other special needs were being taken out by trucks. Two churches were serving as shelters. Public housing, senior projects and private residences were all affected. Mayor Dawn Zimmer said senior citizens were the most distressed and eager to get more supplies.