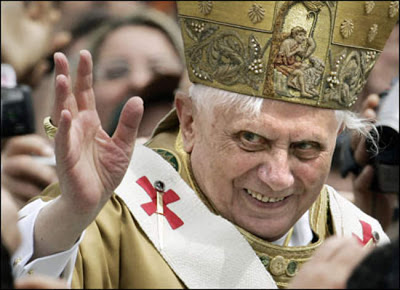 Pope Palpatine has issued a book declaring that the birth of Jeebus is off by several years.

“The calculation of the beginning of our calendar – based on the birth of Jesus – was made by Dionysius Exiguus, who made a mistake in his calculations by several years,” the Pope writes in the book, which went on sale around the world with an initial print run of a million copies. “The actual date of Jesus’s birth was several years before.” The assertion that the Christian calendar is based on a false premise is not new – many historians believe that Christ was born sometime between 7BC and 2BC. But the fact that doubts over one of the keystones of Christian tradition have been raised by the leader of the world’s one billion Catholics is striking.

Many people, of course, don’t believe that Jeebus was ever born at all and is actually a composite figure fictionalized from multiple earlier savior mythologies.