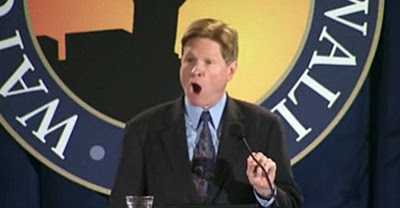 Peter Sprigg: The Rise In Out Gays Disproves The Gay Gene Theory

“There has been a significant growth in the number of women who identify as lesbian, bisexual or transgender — a much larger growth than the number of men. In 1994, there were twice as many homosexual men as women, but now homosexual women actually outnumber the homosexual men. During that time span, the number of homosexual men has increased by 18 percent while the number of women who identify as such has gone up 157 percent. I think that that suggests that there are strong cultural factors at work and that, at least indirectly, undermines the whole theory of a gay gene. If there were a gay gene, we would never see evolution taking place at that rapid a pace; so something else must be at work.” – Family Research Council spokesbigot Peter Sprigg, speaking to OneNewsNow. (Via Good As You)

Previous TODAY: Transgender Day Of Remembrance
Next The Crystal Ark – We Came To