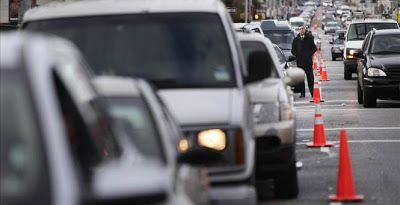 As gasoline shortages continue to plague much of the tri-state area and fistfights break out in the mile-long lines, at 6am this morning Mayor Bloomberg instituted a gas rationing program across NYC’s five boroughs.

The mayor said the measure, imposed by emergency order and similar to one put in place in 12 New Jersey counties by Gov. Chris Christie on Saturday that has been considered effective, should cut down lines and allow gas stations to stay open later. “This is not a step that we take lightly,” he said, “but given the shortage that we will face for the next few weeks and the growing frustrations of New Yorkers, we believe it is the right step.” The gas rule applies to most private cars. Buses, taxis and livery cabs, emergency vehicles, commercial vehicles, paratransit vehicles and cars with MD plates are all exempt. Under the rule, motorists whose license plates end in an odd number or any letter or other character will be able to buy gas only on odd-numbered dates of the month. Drivers with even-numbered plates (0 counts as an even number) will be able to buy gas only on even-numbered dates. Violations of the gas rule are class B misdemeanors, punishable by up to three months in jail.