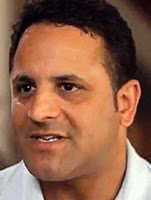 NOM Spokesbigot: Obama Is A Terrorist

“Apparently, there are more than a few disgruntled Americans who are toying with the idea of moving to Canada. CNN is calling it ‘election season bluster’. I call it flat-out ignorance. You live in the freest country ever known to mankind. As the anthem states, America is the land of the free but freedom comes with bravery, not running and hiding. Your job is to stay. And fight. For the battle is still ongoing. You leave, the terrorists win. And heck, isn’t that what the Terrorist-in-Chief wants, anyway?” – Unemployed Canadian sportscaster and NOM spokesman Damian Goddard, writing on his blog.  (Via NOM Exposed)