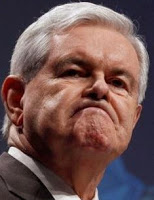 Newt Gingrich Has The Sadz

“We need to stop, take a deep breath and learn. The president
won an extraordinary victory. And the fact is, we owe him the respect
of trying to understand what they did and how they did it. But if you had said to me three weeks ago Mitt Romney would get fewer
votes than John McCain and it looks like he’ll be 2 million fewer, I
would have been dumbfounded.  I was wrong last week, as was virtually every major Republican analyst.
And so, you have to stop and say to yourself, ‘If I was that far off,
what do I need to learn to better understand America?'” – Newt Gingrich, who one week ago today appeared on the Today Show to predict a Romney landslide.