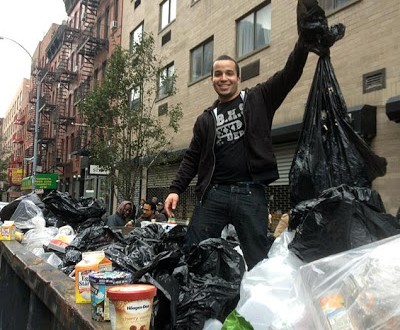 Met Food supermarket workers at the corner of Prince St. and Mulberry St., had to toss scores of garbage bags packed with foodie eats like Pom pomegranate juice, soy chai latte, organic eggs, and Ben and Jerry’s ice cream, clearing the shelves in the wake of Sandy’s aftermath. Shop owner Paul Fernandez said his store – like most of Manhattan south of 40th St. – has been without power since the storm hit Monday forcing him to trash the entire deli section along with all his meats and dairy products. “I had to throw out all of my perishables. I can’t sell it to anybody. It’s like $40,000 worth of food.” Fernandez said watching hordes of people packing shopping carts and backpacks with his groceries. NYU student Ilana Breen, 20, said she’d been wandering the streets all day looking for a working ATM or an open store in order to buy food. Her apartment on E. 23rd St. is without power with rotting grub in the fridge. “We just saw all these people in the Dumpster. This isn’t a trash can. This is a heap of food,” Breen said.