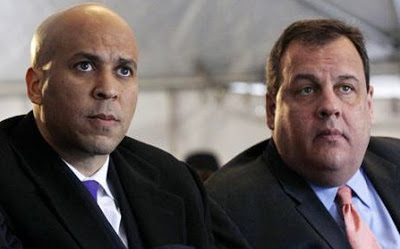 The Newark Star-Ledger today reports that both Garden State Equality and the Human Rights Campaign are encouraging Mayor Cory Booker to challenge Gov. Chris Christie in his 2013 re-election bid.

Steve Goldstein, the head of New Jersey’s largest gay rights organization, says he’ll go “door to door from New Jersey to West Hollywood to raise millions of dollars” if Newark Mayor Cory Booker runs for governor. Barbara Siperstein, the state’s first transgender party delegate, says she has received phone calls from lesbian, gay, bisexual and transgender (LGBT) organizations across the country who are eager to hold fundraisers for Booker. “Like few others, Cory Booker manages to capture the imagination of the LGBT community from all over the country, and from all walks of life,” said Fred Sainz, a vice president with the Human Rights Campaign, the nation’s largest LGBT civil rights group “I would suspect a wide diversity of Americans would support his campaign and help get him the resources he needs to win.”

The Star-Ledger notes the moment at the Democratic National Convention when Booker broadly hinted his 2013 intentions to the LGBT Caucus by saying, “I’m telling you right now, it’s not a matter of if we’re going to win marriage equality in New Jersey. It’s a matter of when we’re going to win it. And I know in my heart of hearts, if God is willing, I will be there on that day that bill is signed. I might even have a very good seat when it gets done.” (I was live-tweeting from the room at that moment and almost broke my fingers getting that quote out.)

Previous On The Rising Seas
Next Morning View: Upper East Side