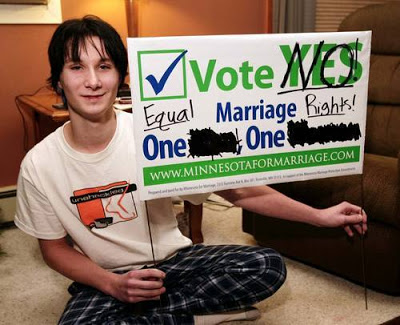 A Catholic church in Minnesota denied confirmation to a 17 year-old student after seeing the above photo on his Facebook page.

The decision by the Rev. Gary LaMoine to deny the religious rite of passage for Lennon Cihak in mid-October shocked his mother, who said her son has gone to church every week and volunteered around the community in preparation for his confirmation this year. “You kind of know the Catholic beliefs, but I never thought they would deny somebody confirmation because you weren’t 100 percent. I guess that’s what shocks me,” Shana Cihak said. Lennon said fellow students in his confirmation class “liked” the photo on Facebook, but they were still allowed to be confirmed. “I just thought it was wrong to single him out,” Shana said. Her husband, Doug Cihak, agreed. “(LaMoine) was talking about ‘God doesn’t believe in this.’ Well, God created Lennon,” said Doug, adding that he was baptized and raised in the same church. But now the family is not allowed to participate in Communion there, Doug said, and he’s worried as to how far the sanctions will go, expressing concern about being able to be buried alongside his parents.

Confirmation is one of the seven sacraments of the Roman Catholic Church.