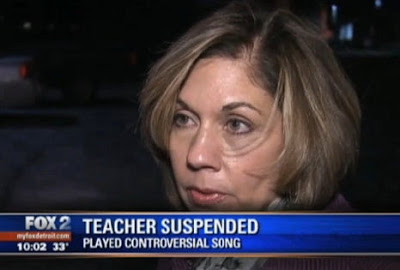 A public middle school teacher in Michigan has been suspended for playing a popular pro-gay music video upon a request by a student.

“I asked him a few questions about the song. If it was violent, if there was any profanity, and he said no. And I said this sounds like a great song to go ahead and use for the class,” said Susan Johnson. The song is called “Same Love” written in support of same sex marriage. Underground rapper Ben Maclemore tackles the dangers of hate and stereotypes by showing the struggle of a homosexual man from birth to death. As Johnson listened to the song, she said she thought to herself this was something her students could learn from. “This is one of the things in my school that we’re trying to practice and we’re trying to instill in our students is tolerance to diversity,” she explained. However, another student in class didn’t agree with the lyrics, went to the office and complained. Before the school day ended, Johnson claims the principal and assistant superintendent told her she was suspended indefinitely without pay. “I don’t think that it was really even thought through,” she said. “I was paralyzed. I really didn’t understand why I was being suspended.” Assistant Superintendent Melissa Baker didn’t care to elaborate. “No one is going to have a comment for you. We don’t go on camera here in South Lyon,” she said.

The video now has almost 8 million views on YouTube. Here it is again, in case you missed it two months ago here on JMG.