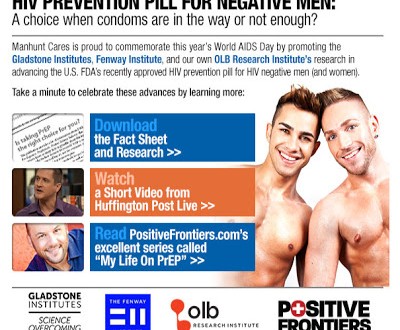 The hook-up site Manhunt today announced that they will begin promoting the usage of Truvada, which was recently approved by the FDA as a daily HIV preventive for high-risk populations. Via press release:

Manhunt has partnered with Gladstone Institutes’ Dr. Robert Grant and The Fenway Institute to assure that the information conveyed is accurate and consistent with peer-reviewed published science. This promotion is part of Manhunt’s 2012 Social Responsibility Initiative, and it is entirely self-funded. The promotion is being sent to over 2.5 million Manhunt members on World AIDS Day through Manhunt’s internal email broadcast system with the following tagline: “HIV Prevention Pill for Negative Men (and women too): A choice when condoms are in the way or not enough?” The campaign encourages members to visit Manhunt Cares™ dedicated PrEP page to learn more about this important biomedical intervention.

As we’ve noted here on JMG many times, the usage of Truvada as an HIV preventive has somewhat fractured the HIV/AIDS advocacy movement. The AIDS Healthcare Foundation, in particular, campaigned against its approval for this usage and called the FDA’s decision “reckless.” The San Francisco AIDS Foundation and amFAR, however, both support Truvada’s usage as a preventive. The long-term effects of Truvada on uninfected (and infected) individuals remains unclear.