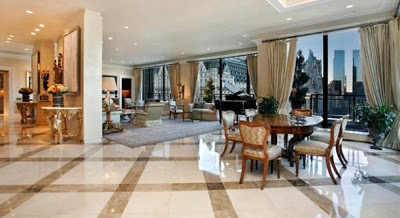 Billionaire gay music mogul David Geffen has agreed to pay a record-setting $54 million for an Upper East Side penthouse.

The co-founder of Asylum Records and DreamWorks just closed on a $54 million duplex penthouse on the upper East Side owned by songwriter and socialite Denise Rich, real estate insiders say. The Brooklyn-born Geffen already owns an apartment in the same building, 785 Fifth Ave. at 60th St., right below the duplex. His new 12,000-square-foot unit has 20 rooms and outdoor space galore, with a roof deck and wraparound terraces amounting to another 5,000 square feet. The interior amenities include fine marble flooring, mahogany doors and multiple fireplaces. The upper level features a chef’s kitchen near a dining room that can seat 22. But if Geffen wants a snack, there are two more kitchens on the lower level. He can work it off in the full gym that overlooks Central Park.

While Geffen’s buy is the record for a co-op apartment, two condos (which do not require board approval to purchase) recently sold for much more.