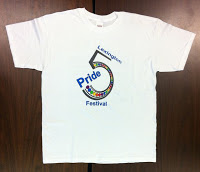 Earlier this year anti-gay groups raised a stink when a Kentucky gay pride group filed a complaint because their t-shirt order had been refused by a local printing company. Get ready for more screaming.

The Lexington-Fayette Urban County Human Rights Commission has sided with the Gay and Lesbian Services Organization in its discrimination complaint against T-shirt printer Hands On Originals, setting up a potential public hearing between the groups.  In a document released by both the GLSO and Hands On Originals, the commission found the company violated the city’s fairness ordinance, part of which prohibits businesses open to the public from discriminating against people based on sexual orientation. The commission also noted the company should stop “discriminating because of sexual orientation.”

The GSLO ended up getting their shirts for free from a Cincinnati company. Both sides will now appear at a hearing at which compensatory (but not punitive) damages might be assessed. The t-shirt company, which is being represented by the anti-gay Alliance Defense Fund, claims that they are well-known for being Christians and that they have previously refused orders from other groups with whom they disagree.

Previous NEW YORK CITY: Hurricane Sandy Victims Remembered With Rainbow Laser
Next Rick Warren: Acting On Gayness Is Like Punching Someone In The Nose