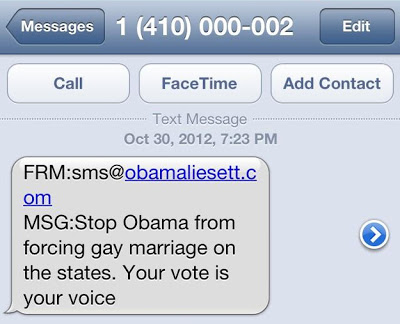 The Human Rights Campaign has filed a complaint with the FCC over anti-gay text messages being sent to voters in states where marriage is on the ballot. Chris Geidner reports at Buzzfeed:

Following a series of anti-Obama text messages received on Tuesday night — some of which addressed the president’s record on LGBT issues — HRC, the nation’s largest LGBT political group, asked the Federal Communications Commission to investigate the company. The company, ccAdvertising, has not admitted to sending the messages. But the dummy sites used to send the messages were registered to company executives. Additionally, one of those executives — Gabe Joseph — is known for using questionable tactics, according to Republican operatives familiar with his past activities. BuzzFeed has reported that the “email-to-text technology” apparently employed by the sender of the messages — which sends emails to cell phones in the form of SMS messages — allowed the firm to deliver unsolicited texts from web domains rather than phone numbers, all the while skirting existing Federal Communications Commission regulations.

HRC vice president Fred Sainz: “It’s unacceptable to launch these types of despicable attacks from dark corners, and it’s incredibly irresponsible to send out unsolicited messages to people who have no desire to receive this type of vitriol.”