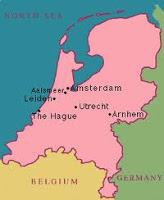 Press TV has the story:

The Dutch parliament will approve a motion to abolish a law that criminalizes blasphemy, mainly due to strong support by the Liberal Party (VVD).  On Wednesday, a majority of parties in the Netherlands stated that the blasphemy law was no longer relevant in the 21st century. The VVD party had refused to support efforts to annul the law during the tenure of the previous government in order not to upset the fundamentalist Christian party SGP, whose support was necessary in the upper house of parliament.

The Christian-right party has denounced the decision, saying that it is a “painful loss of a moral anchor.” It will still be illegal to insult the police or Queen Beatrix.