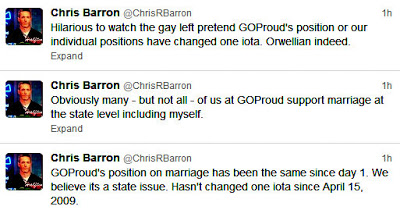 GOProud head Jimmy LaSalvia spent the post-election week telling anybody that would listen that it’s now time for the GOP to support same-sex marriage. Today co-founder Chris Barron went off on those needling him about the issue by saying that GOProud has always believed that marriage should be a state issue. Which is exactly why they endorsed the man who wanted to take that decision out of the states’ hands and install a federal ban in the U.S. Constitution. Homocon logic, as baffling as ever.

Previous Jesus Came For You
Next Chicago Tribune: Marriage Is Unstoppable